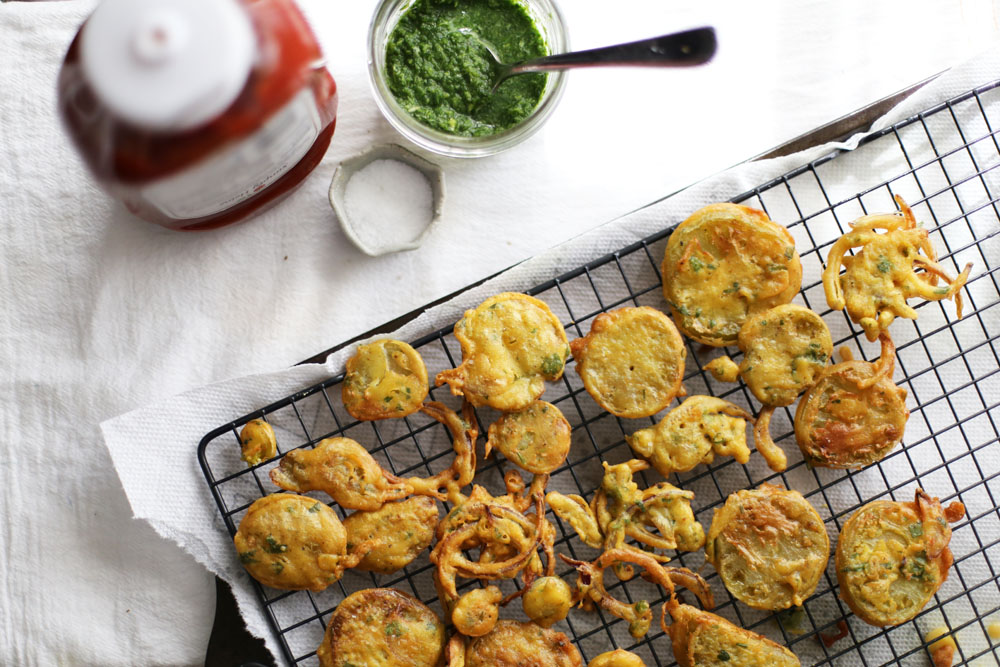 There are very few things that I miss about home more than afternoon tea-time. Few things fill the spaces in our day better than this humble beverage. What was once an ideal way to break the monotony of a day job has become a symbol (to me, at least) of what it means to yearn for home. Ironic since it’s a ritual and trade left behind by our former white imperialist rulers (Hi Britain, I’m talking about you).

I have had many, many cups of tea since I move to Washington. I have tried to make it with ginger, cardamom and whatever they’ve said I need for chai. It hasn’t worked. In my home, we had milk tea minus the spices, so I never knew that masala flavour growing up. In Bombay, the men who made us tea for a humble or no fare had their own secret way of doing so. From “kickass chai” to “Francis chai”, these are all the tastes I seek when I’m offered the chance to drink tea. Sadly, no cup I make or buy seems to live up to expectations when I do it here in the US. I don’t know what that’s about but I think it has something to do with the camaraderie of sitting around the table or on a makeshift plank supported on two dodgy bamboo sticks on the side of the road. Or maybe it’s the water.

Few things go better with tea than bhajia, especially when it starts to rain or during Ramzan iftar. My dad, who grew up in Bombay, introduced us to this and many, many other street foods right from his kitchen in Goa. The lane where he and his 6 brothers and their parents lived took on a life of its own as most streets in Bombay do. Called St Francis Xavier Street, it has a church and two Catholic-run schools, about 5 or 6 residential buildings – a couple of them in the style of a chawl, a pay-to-join member-only club called The Goan Institute, and a grain miller. Walk out to the main road and you’ll find yourself standing on one of the many lifelines that make this city’s heart beat. Whether to choose to go left or right, you will run into people running businesses that make up sub-cultures from all parts of the country. It might sound exaggerated, but it’s not. Bombay street food is like nothing else. Every metropolis claims theirs is the best but I’m biased.

Obviously, the first person I called to ask for this recipe was my mother. She’s a good cook, who would rather do other things with her time. She is the parent who asks my questions to my daddy-o and repeats his answers back to me. I can hear what he says through the phone but she says it again, anyway. For as long as I can remember, my father has been the snack maker in our house. After living in Bombay for 6 years as an adult, I realise that maybe he’s trying to remember it all too. He was there for much longer than I was and while he can never live there again, the pace at which he moves is testament that the city never leaves you.

I can’t speak for my sisters but bhajia in the afternoon – after school and in between homework – was my favourite thing. I’ve watched my dad make it so many times and have never once had a chance to make it in the same kitchen as him. I will always be too young and he will always be too fast. My love for potatoes and deep-frying comes directly from this besan covered goodness I watched him make for tea in what seemed like a matter of minutes. My love for this human, also lies somewhere in between. 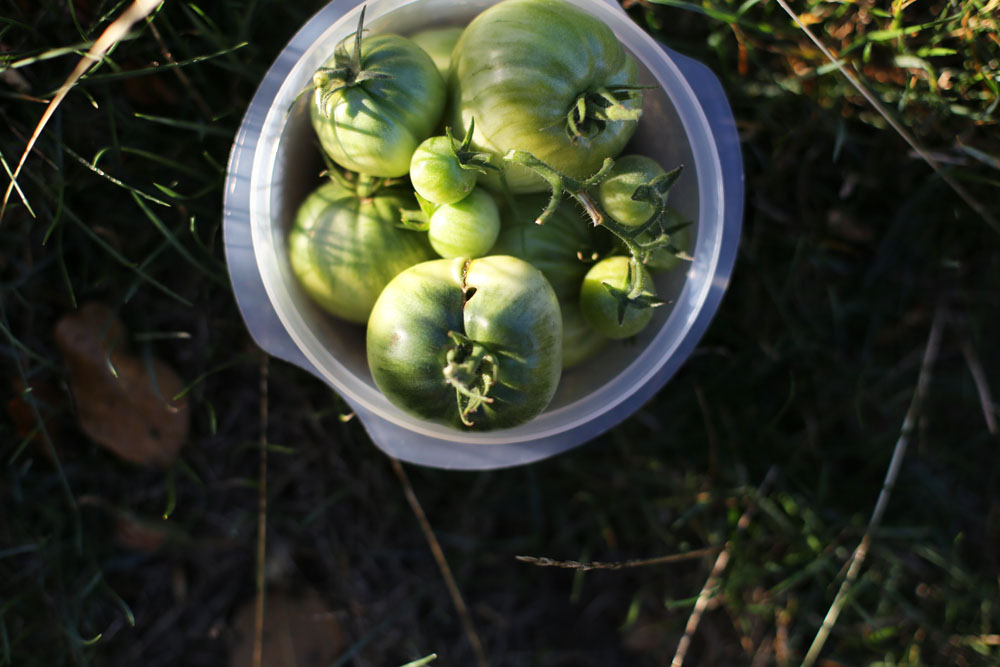 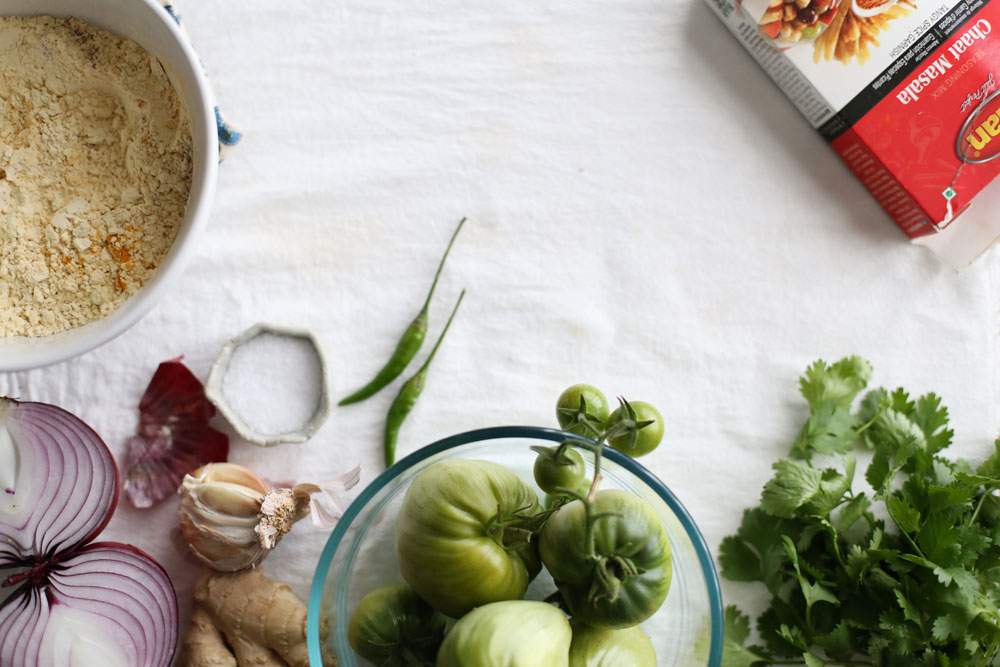 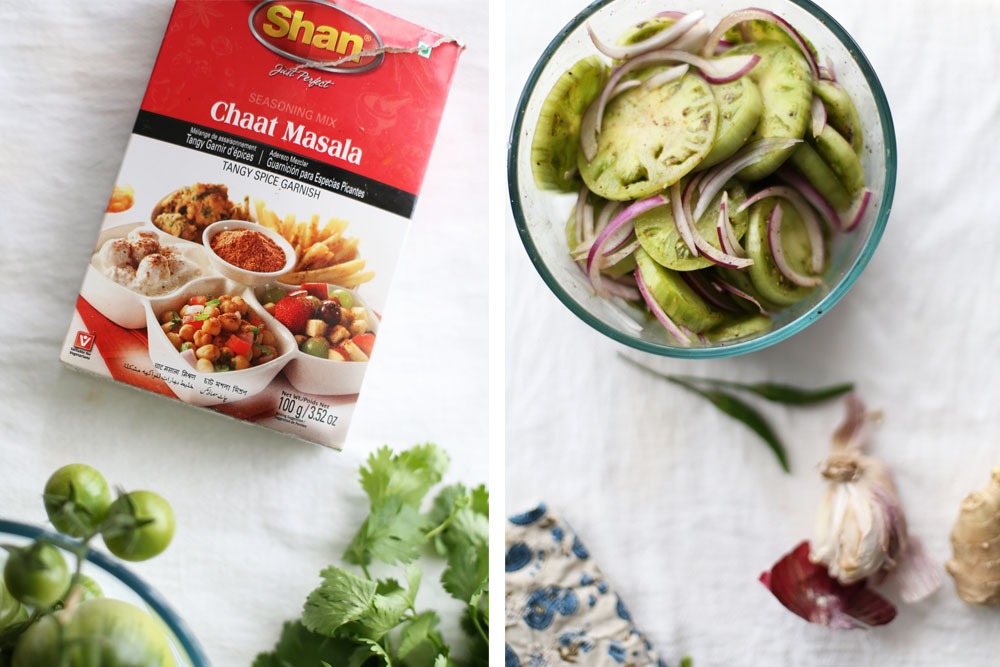 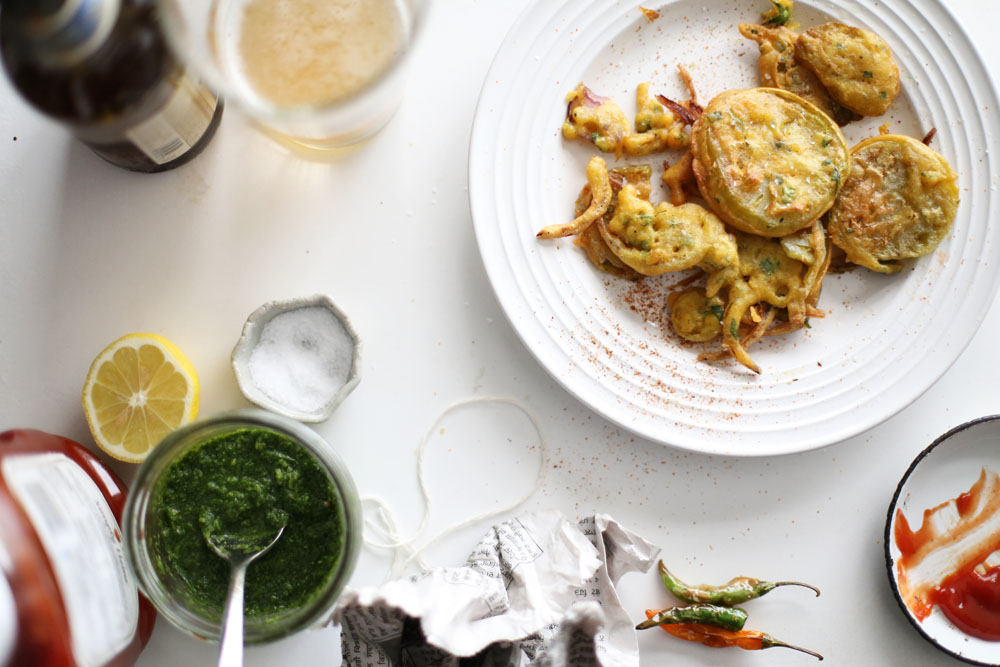 This recipe was inspired by a majority of the tomatoes in the garden that aren’t going to ripen in time. Their firmness makes them a perfect candidate for this snack. You can coat most vegetable in this batter. Potatoes, onions and chillies are the most popular of this kind. Bread pakodas are also awesome (whole sandwich with a masala potato filling dipped in batter). In the US, “pakoras” is the word you’ll hear most commonly because North Indian food seems to be the restaurant thing to do. We call it bhajjas in Goa (DIVERSITY, FOLKS). Thank you, Sidharth for helping me clarify the words and their spellings.

Chaat masala. What is that? It’s a sour, spicy, kind of sweet and salty spice mix. You can’t quite put your finger on it but when you’re eating it on something, the taste cannot be mistaken. I’ve used it in this raita recipe before and also on fruit, chaat and eggs (ok edlyn). Keep it in your spice cupboard for whenever you want to surprise yourself. Or wait until Bon Appetit writes a “MUST-HAVE” bs article and then you can buy it. Up to you.

Mix the tomatoes and onions in a bowl with the chaat masala. Let it sit while you make the mixture for the batter.

In a medium-sized bowl, mix together the besan, chilli powder, turmeric and cilantro. Add the water to the bowl a little at a time and stir as you go, until the ingredients form a batter. It should be a loose-ish batter but have enough density to coat the tomato and onion slices. Add salt to taste. I have mentioned 1/2 tsp, but taste a little bit of the batter and add more or less as you prefer

This step is optional: Prepare a wire rack and place newspaper or paper towels underneath it to drain the bhajias. This will help keep them crispier.

Add enough oil in a kadai or heavy-bottomed pan (I used a cast iron skillet) to come up to a depth of 3-4 inches. Heat the oil on medium heat. To gauge if the oil is ready, drop a small bit of the batter into the pan. It should sizzle immediately (complete with the sound). Dredge the tomatoes and onions in the batter and gently drop them into the oil. Cook for about a minute or two on each side or until the bhajias turn a deep golden-brown. Remove from the hot oil and drain on the wire rack. Sprinkle with chaat masala or a mix of salt and chilli powder. Serve hot with green chutney (recipe below) or ketchup. As we say in the homeland, “SAUCE”.

Alternatively, you can drop the bhajias onto a plate with paper napkins and eat as soon as you can manage to sink your teeth into them without burning your tongue.

For the green chutney

Add all the ingredients to a food processor and process until it turns to a paste. Scrape the side of the processor occasionally and if required, add a tablespoon at a time of more water until it all comes together. Add salt to taste. 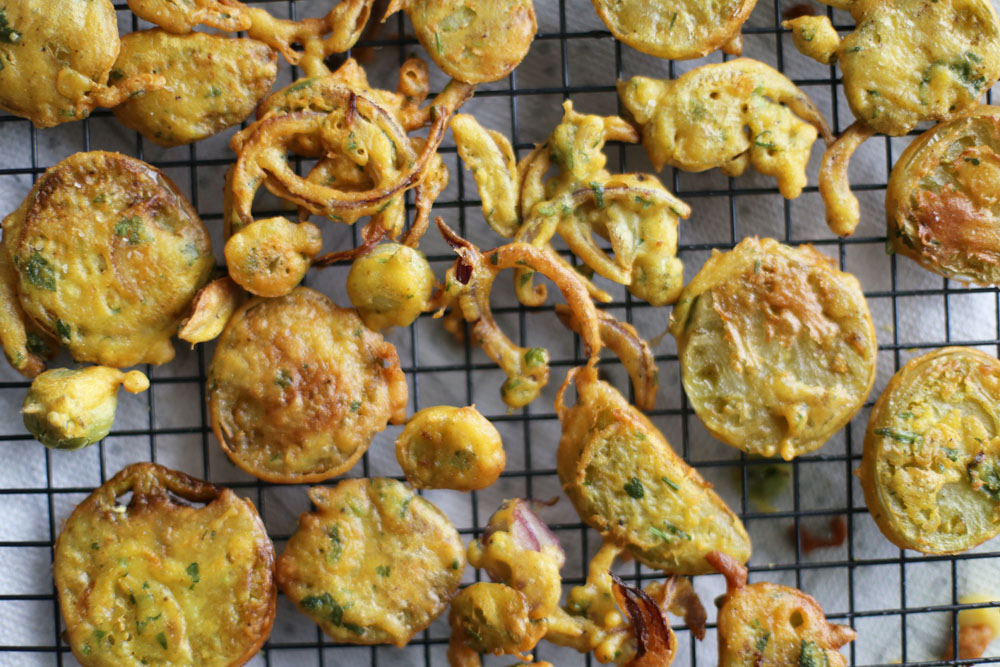 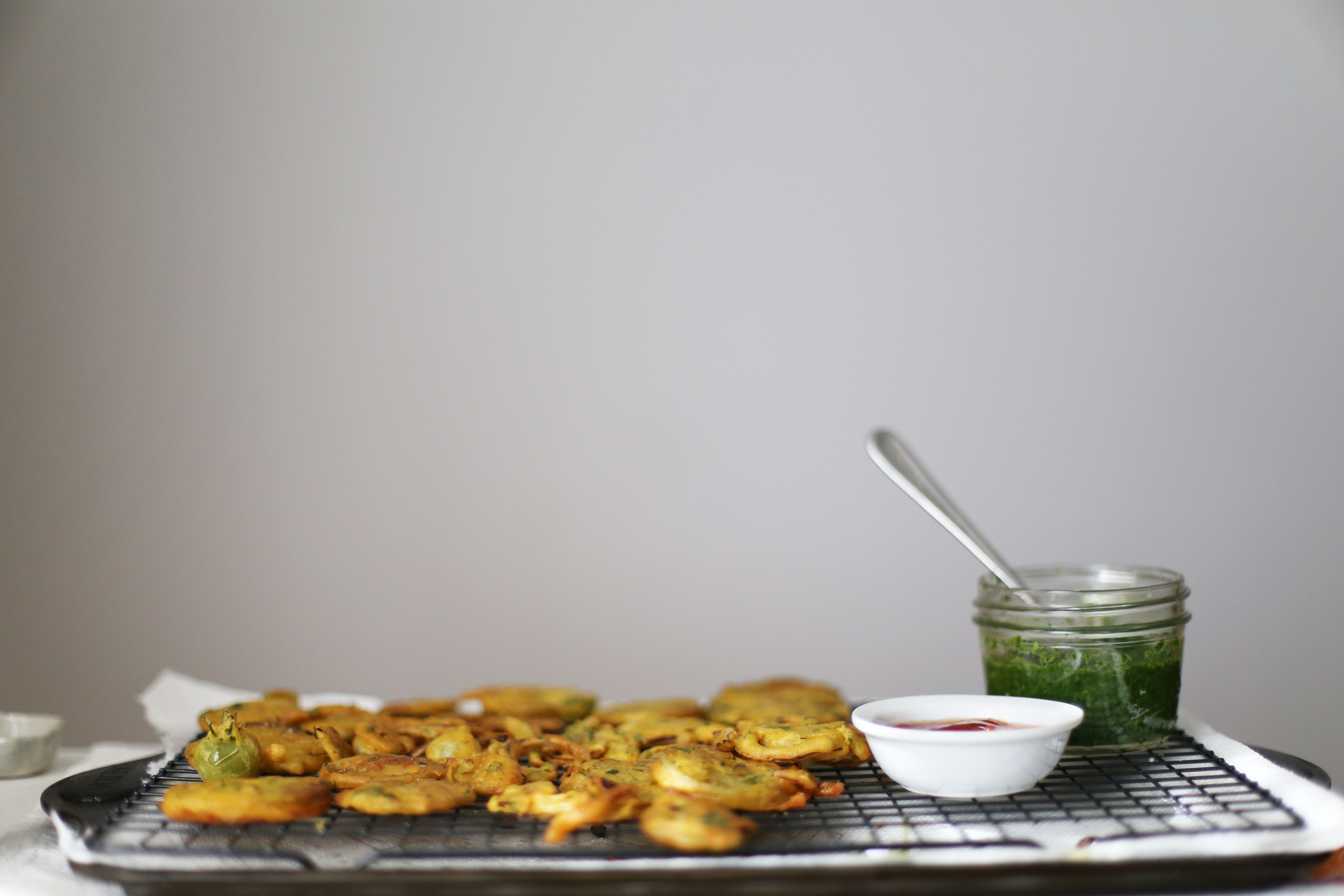