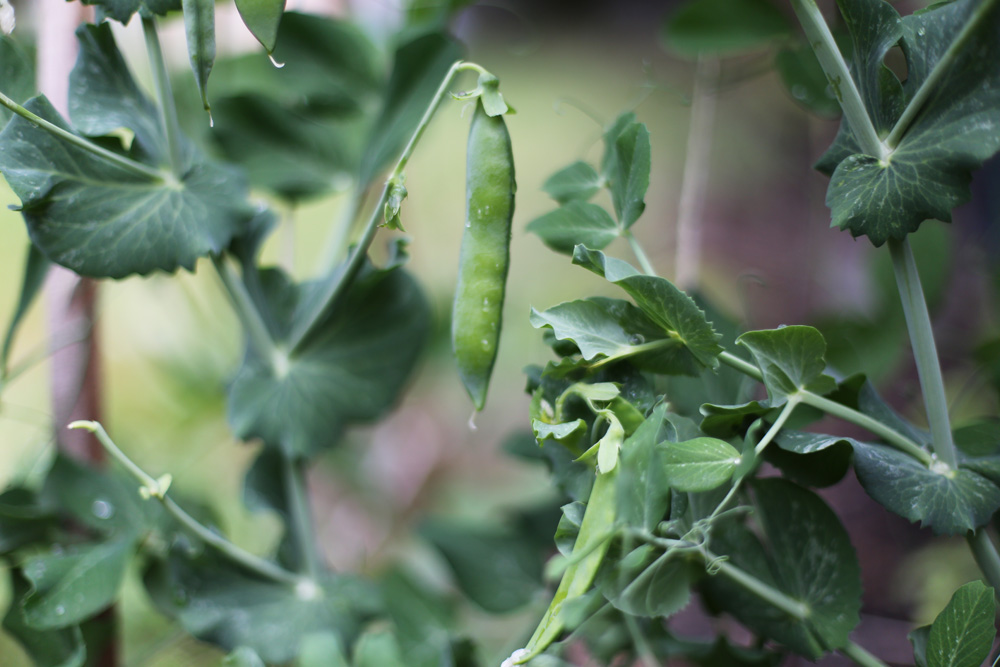 I was walking on the pavement in Bombay in 2008 – a remarkable thing when you’re in the city – past some heritage buildings that the British left us as visible reminders of an imperialist past. It had been a while since I was in that area near the VT train station. Though I lived close by, work was in the opposite direction. This is the part of town where I went to college. It was where we restricted most of our hanging out when we were not in the college canteen. It was here in 2006 when we found out about a series of bombs (seven of them) that went off during rush hour on the Western Railway line. My friend who I was with at the time was setting off to go catch his train home when he got the message to stay where he was. Nothing would be moving that night.

I looked up at the BMC building and morbidly thought, “What’s stopping someone from walking through those doors and blowing up the place?” There was enough tension for that to be a possibility. While there were metal detectors and police at the entrance, I knew if it ever came to that, people would be helpless to their fate. A few months later it happened. A group of indoctrinated men gunned down innocent people at VT station and took other innocent lives all a couple of kilometers from where I lived, right outside where I and many other students got a college education and from where I still had friends and memories. Seemingly random targets that make your stomach sink for what worse could happen next.

It’s a given how little all of this is about me. I am not a main character. I’m a supporting one at best. It was just my luck that I wasn’t in any of those places and it’s my privilege to sit here and write about it like it could have been.

I don’t know what words I’m trying to say exactly. I don’t know whom I have to defend. Is it my practicing and once upon a time Muslim friends whose names are their identity and who automatically become targets of hateful speech? Is it my LGBTQIA friends who are constantly told they don’t deserve human rights even though they work jobs and pay taxes and sit in traffic and complain about the weather just like you and I do? It’s sad that I have to do either but it’s also a privilege that I can. All I know is that these are my friends – my people. This is who they are and this is who they are sometimes afraid to be. I will always try to be better for them and to let them be heard. Their being gay or Muslim or black or white or depressed matters to me. They matter to me.

What happened in Orlando is something that I feel very uncomfortable talking about even though I shouldn’t because I live here now (not as a citizen, just a resident). It makes me feel like I’m forgetting I come from a country where it’s still a crime for gay people to have consensual sex – another law we have the British to thank for. Our Prime Minister has done nothing ZERO for gay rights but on hearing about the shooting at Pulse, he tweets this. What did he think those people died for? Fix yourself first, Prime Minister.

The conversation in every country is different but at the heart of it all, it’s all made up of the same thing – love. Since love cannot be quantified, education is the next best option. Do I think hate crimes are going to just disappear? No. But if we are able to put more money into teaching and learning instead of into the war machine, maybe it can. Speaking to the people you encounter (should the moment arise) about the importance of all forms of equality and demonstrating it with every opportunity you are privileged to receive is small but giant step in the right direction.

I’m sitting here and writing about this in my food blog in the hope that maybe someone will feel inspired to seek out a conversation with a person they’ve always seen as “other”. We all want to be heard but it’s necessary now more than ever to get outside our boxes, into the world and listen. We need to be better allies to understand all this messy history in the hope that these things don’t keep happening over and over again.

(I don’t have a million blog followers and I am a novice but if you’d like to suggest organisations that people can volunteer or work with in your part of the world, please leave it in the comments. Mine right now in Seattle is this one and in India/Mumbai, this is a good one to activate with. Also please feel free to let me know if this blog post is taking attention away from what’s important. I’m open to learning how to be better at this. My email is in the “about” section.) 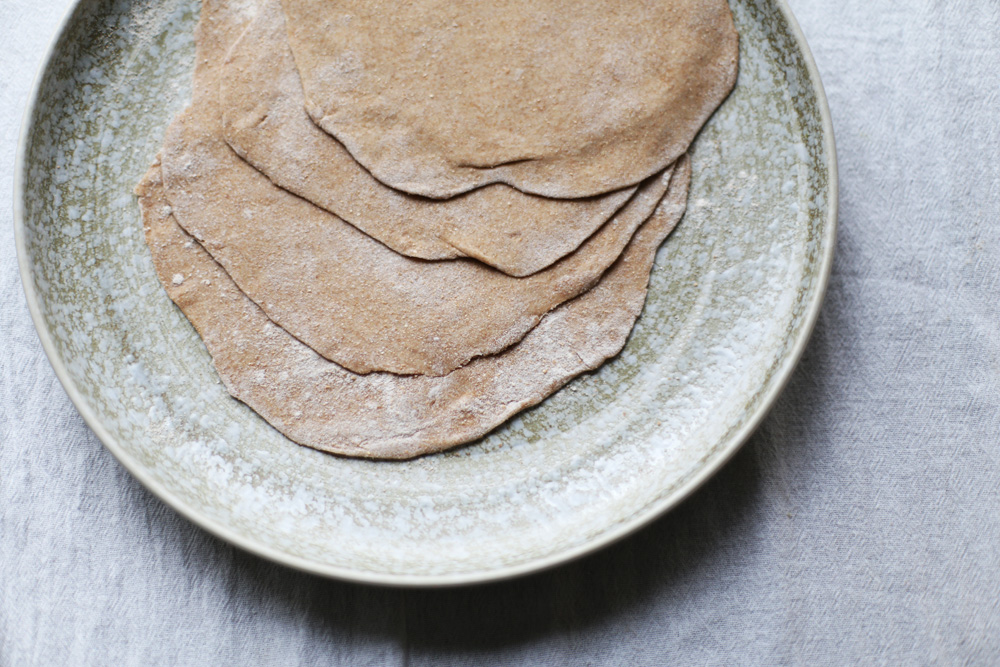 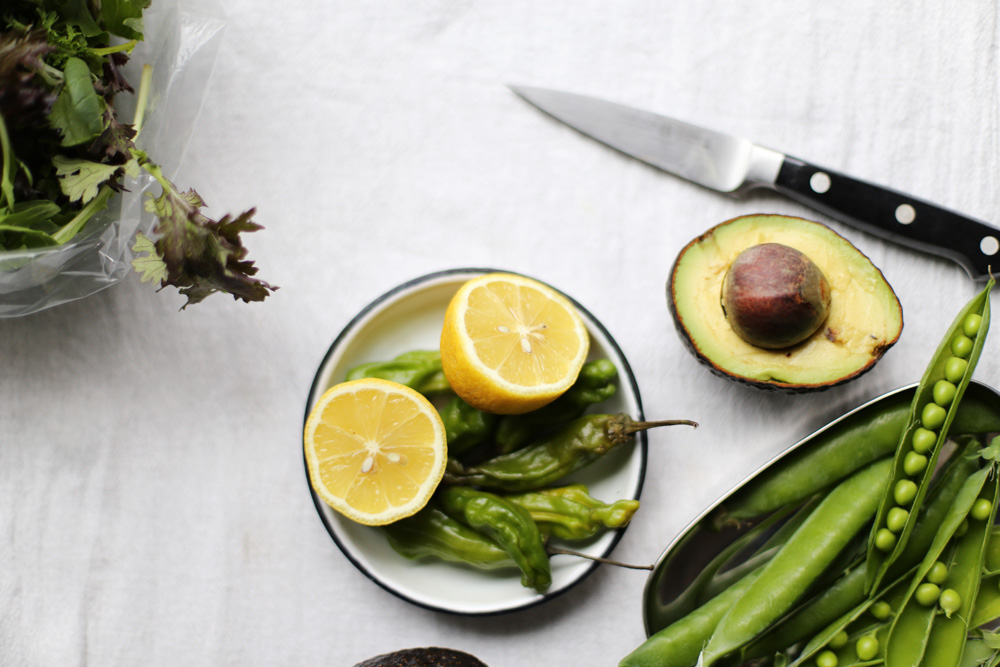 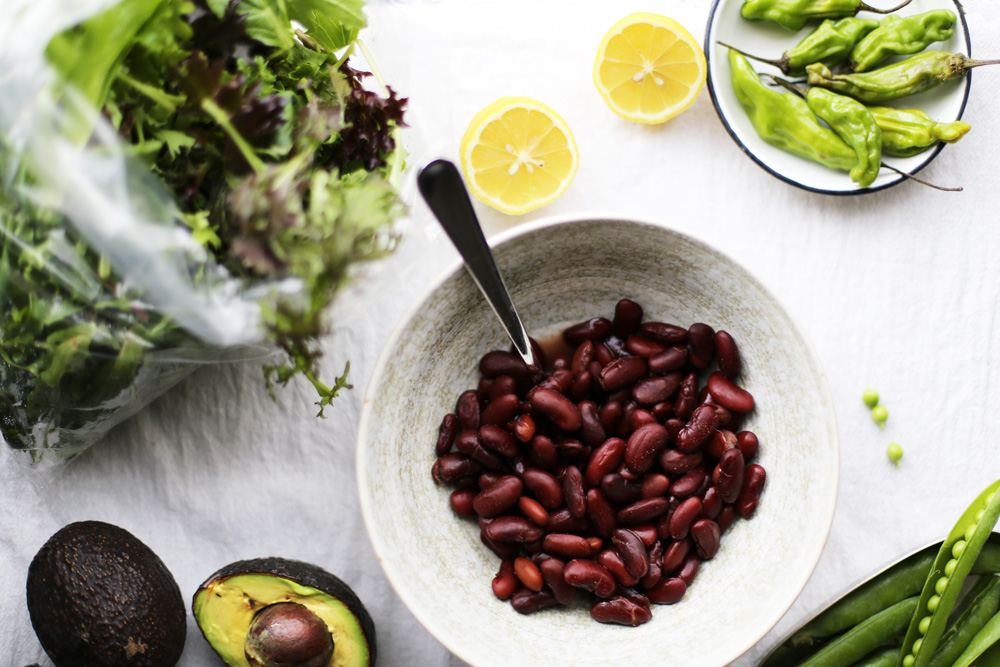 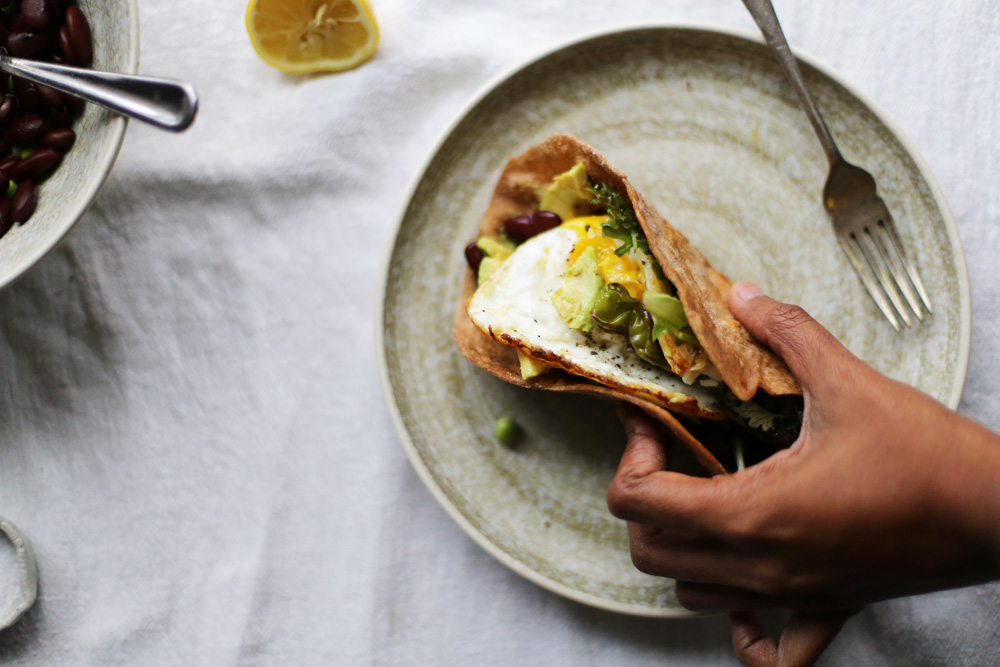 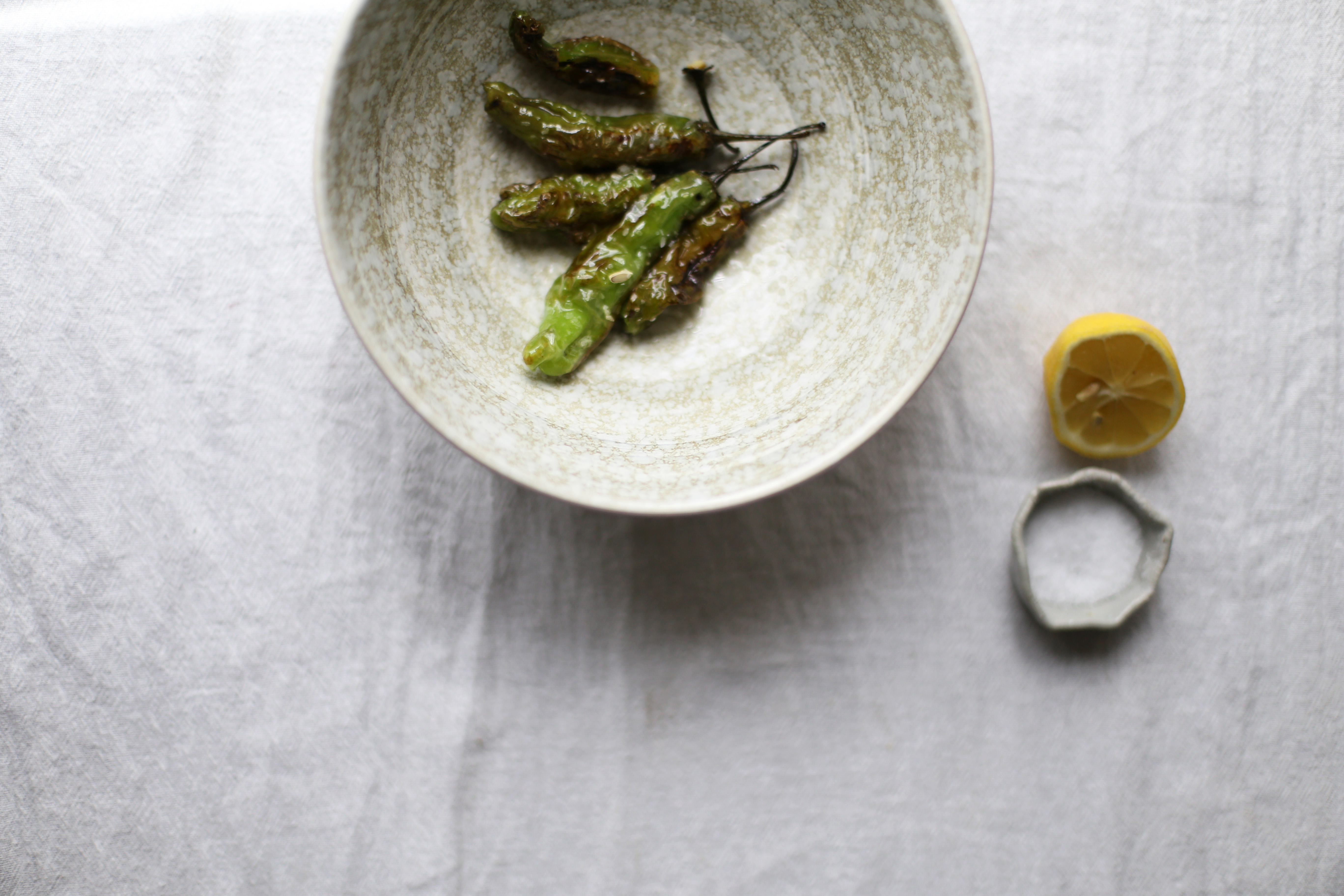 Mix the flour, salt and ghee in a small bowl. Add the water and knead the dough until it all comes together. Knead for about 2 -3 minutes. Keep covered and let it rest for 30 minutes on the kitchen counter.

Divide the dough into five equal sized balls. Dust a working surface with flour. Put a tawa or cast iron pan on medium heat and lightly grease the bottom with ghee. While the skillet is heating up, roll the dough thin as you can without it breaking, into a circle and immediately put it into the hot skillet. The chapati will start to puff up. Let it do so for 15 seconds and then flip it over and coat lightly with ghee using a spoon. Flip it over once more before taking it off the pan. The chapati should have dark brown spots to indicate that it’s done.

Keep it on a plate under a tea towel. Repeat with the rest of the dough.

Heat oil in a cast iron skillet on high heat and add the shishito peppers to the hot oil. Toss occasionally so that the peppers get an even char on all side. Cook for 5-7 minutes and put the peppers in a small bowl. Squeeze lots of lemon juice and sprinkle salt on top. Toss to coat well.

Mix the beans and peas together in a bowl

Heat the chapati on a pan and place it on a plate. Top with slices of avocado, salad greens, beans and peas, charred shishito peppers and eggs (if using). Sprinkle with more lemon juice, salt and pepper to taste. Fold over and enjoy. 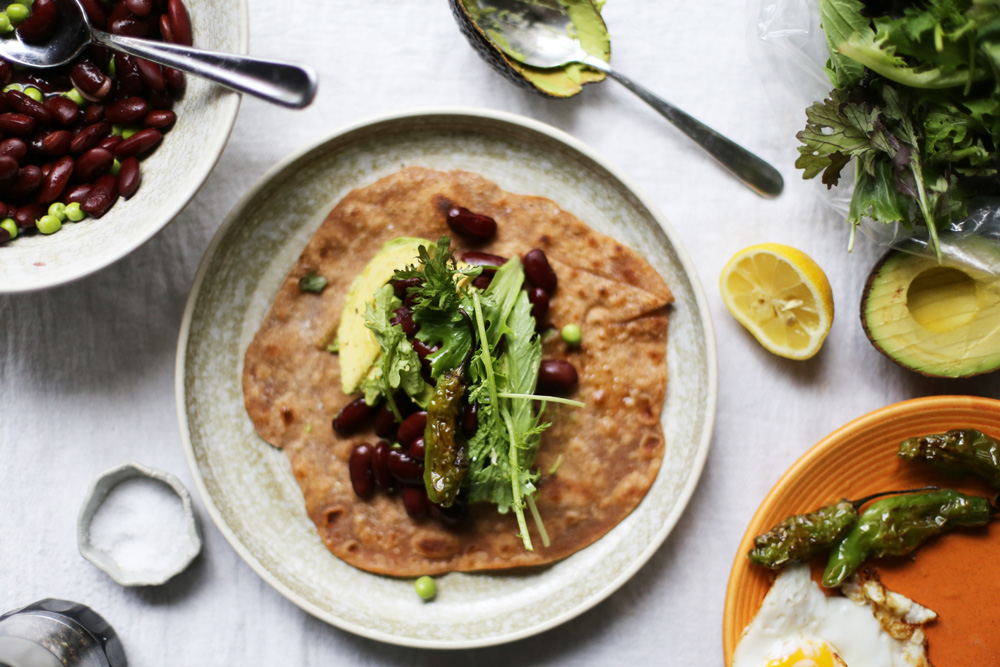 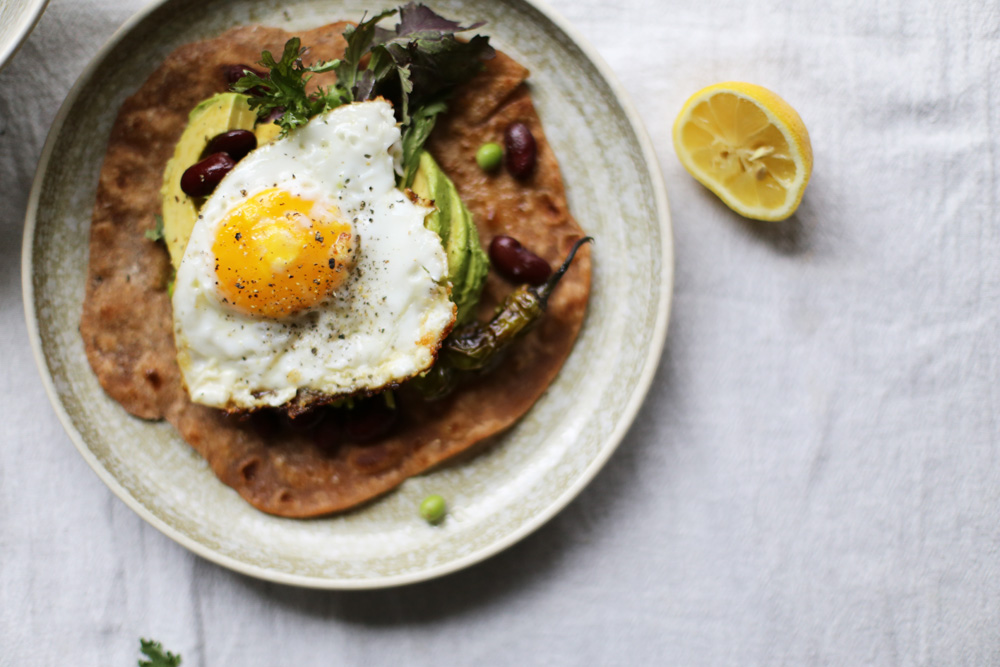