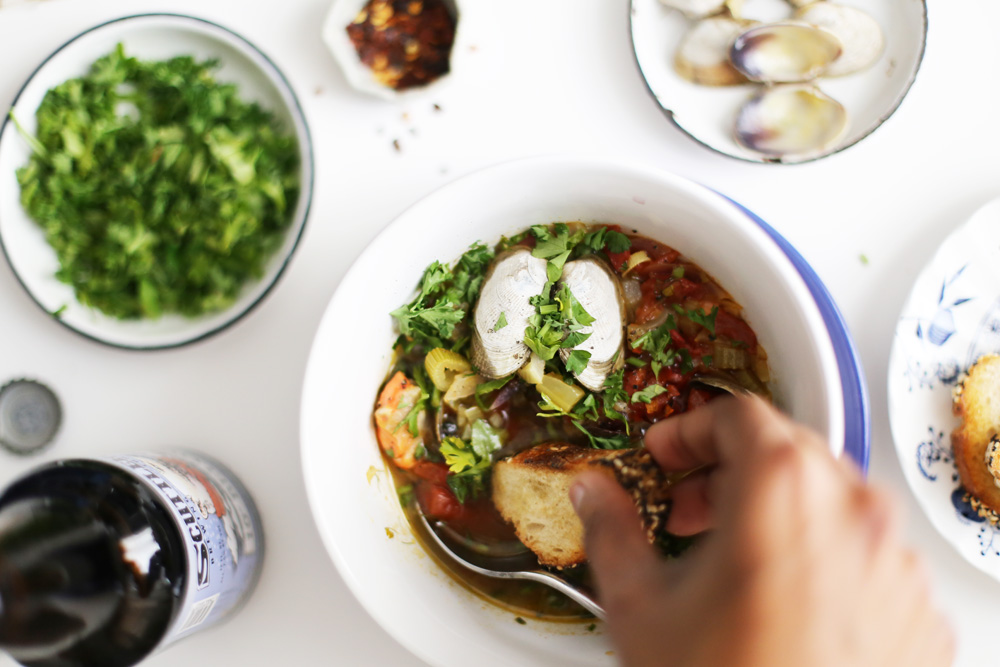 I’m not one to believe in the healing powers of changing over the calendar. Now that I have that out of the way (and for the sake of consistency in using the Gregorian calendar) I have to say that when it turned to January 1 over here – for the first time ever – something felt new. I spent most of last year immersed in writing blog posts almost every week and I guess through all of that sharing, I forgot to tell you that I felt like shit. It was a much better kind of shit (aka when shit is so bad you give it levels of shittiness). I didn’t feel like the floor was collapsing underneath. Instead I was grappling with the idea of “self” and this person I was becoming. I should have been proud for what I accomplished and I am but time seemed to be slipping through my fingers. All that did was make me question what now, why me, etc etc. Don’t ask me how many times I thought about leaving everything and starting over, just me.

Something clicked the moment I decided that I had enough of all the bullshit on this hyper social-but-not-really world. It happened right after the US elections. I too was caught up in the back and forth the months prior. It reminded me of being in the lab getting my blood drawn and deciding to watch how it flowed into those tubes they use to collect us in. I could not look away. No matter how horrible I felt the day after, it was still a massive breathe out. I put away my phone and replaced it with feelings. I wasn’t that millenial before (before millenial was a thing), I became that millenial most of last year and now I’m Formation Beyonce (but not really because I can NEVER be her). Also: What is a millenial?

In short my highlights of 2016 were Lemonade and Rock Camp both of which now run through my veins now. I watched Lemonade in the middle of summer, after everyone had already talked about it. I always care about things 4 months later to satisfy the cynical aspect of my personality. Now, I watch it every time stuff feels hard. I wish I had it when my grandmother decided to die. Through their writing, both Beyonce and her sister Solange shone light on the power of black womanhood. They made you take notice. They told their truth about being black women in America. It’s something that will sit with and move me for a long time to come.

“…Make the woman in doubt disappear”

It’s all proof that no matter how bad it gets, we can make our peace somehow. My catharsis was Lemonade. As for this whole “self-discovery” path that I always find myself on, I have the cosmic calendar to save me. As per Wikipedia editors:

“In this visualization, the Big Bang took place at the beginning of January 1 at midnight, and the current moment maps onto the end of December 31 just before midnight. At this scale, there are 437.5 years per second, 1.575 million years per hour, and 37.8 million years per day.”

It’s still December 31. We have time.

Steamed clams and salmon in a tomato and white wine broth 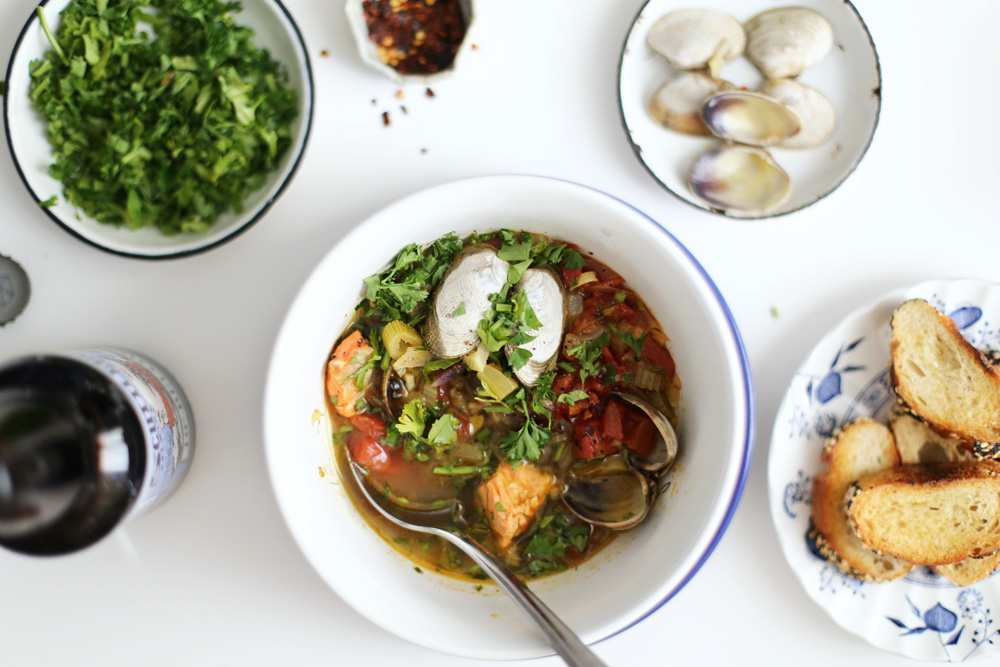 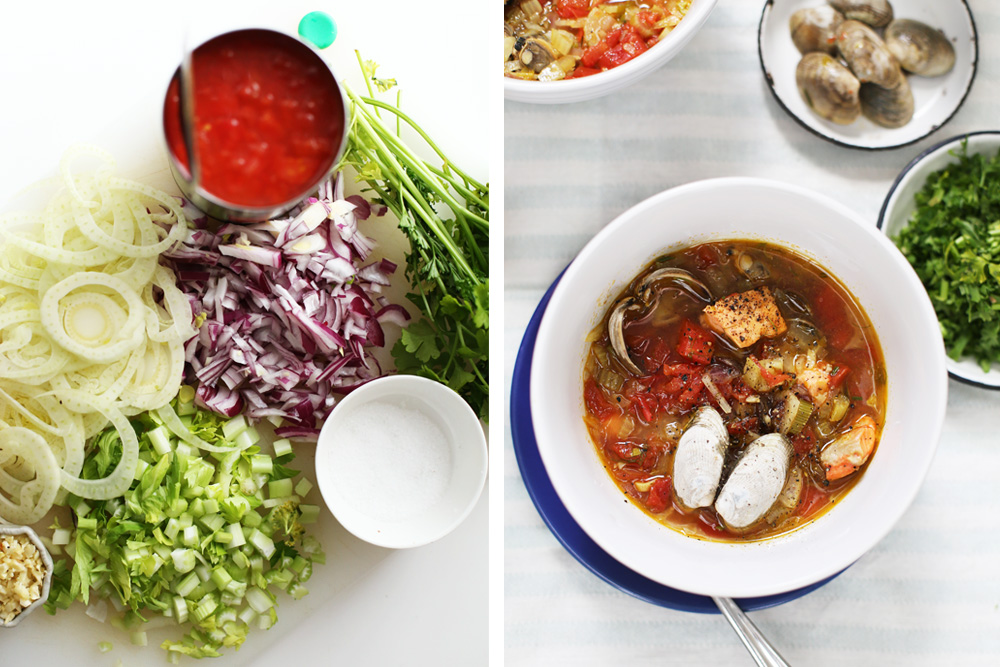 This recipe is a guideline to make some delicious seafood stew any way you see fit. It was hard for me to measure ingredients when I first made this because so much of soup making is instinctual for me as I guess it is for everyone? I figure as long as you add a happy base of onions, tomato and garlic (also celery in this recipe) + bouillon, you can’t go wrong. Pile up the flavour from there. Love ginger? Add some of that. If you fancy some spice, throw in some chilli powder. I put in a double-finger pinch of haldi (turmeric) and some pepper. I added fennel since this was my dinner and it was in the fridge. Any crunchy, leafy or mushy vegetable would be happy to join this bowl. As for the seafood, I only used clams and salmon because it was what I could afford with my work employee discount. You can add any type of white fish or shrimp. If you’d like this recipe to be more seafood and less broth, add less water. The clams just need steam to open and cook so as long as there is some liquid in the pot, they will do just fine.

Cook the salmon in a hot greased pan for 2 minutes on each side.

Prepare all the vegetables and set them aside on a cutting board by the side of the stove. Heat 2 tbsp of the olive oil and butter in a large soup pot on medium heat and add the onion and celery to it. Stir to mix from time to time until the vegetables soften and the onions get a little bit of colour. Add the fennel, garlic and the bouillon to the pot and stir to mix. Let the pot cook for 5 minutes tossing the ingredients to help them cook evenly. Stir in the tomatoes  and turmeric and cook until you notice the oil rise to the surface. Pour in the wine and let it come to a simmer. Let the wine reduce slightly and then add the water. Bring the whole pot to a simmer on medium-high heat.

While the pot is coming to a simmer add 1 tbsp of olive oil to a frying pan on medium-high heat. Once the oil is hot, add the salmon to it. Cook for 2-3 minutes skin side down. When the salmon releases easily from the pan, you know it’s ready to turn. Turn over to fry for 2 more minutes. It’s okay if it’s more rare than you’d like it since it will continue to cook once it’s added to the warm stew. Place the salmon on a cutting board and cut it into bite-sized pieces. You can remove the skin if you don’t like it eating it. However you must know that crispy fish skin is one of life’s little joys.

The stew should be simmering rapidly by now. Add the cleaned clams to it and cover the pot. The shells will open in a minute. Let the stew steam for 2 minutes more and then take it off the stove. Add the fish to it and gently mix it in. Taste and add more salt if necessary. Ladle the soup into 4 bowls and season with black pepper, red pepper flakes and parsley. Dunk in bread and enjoy warm. 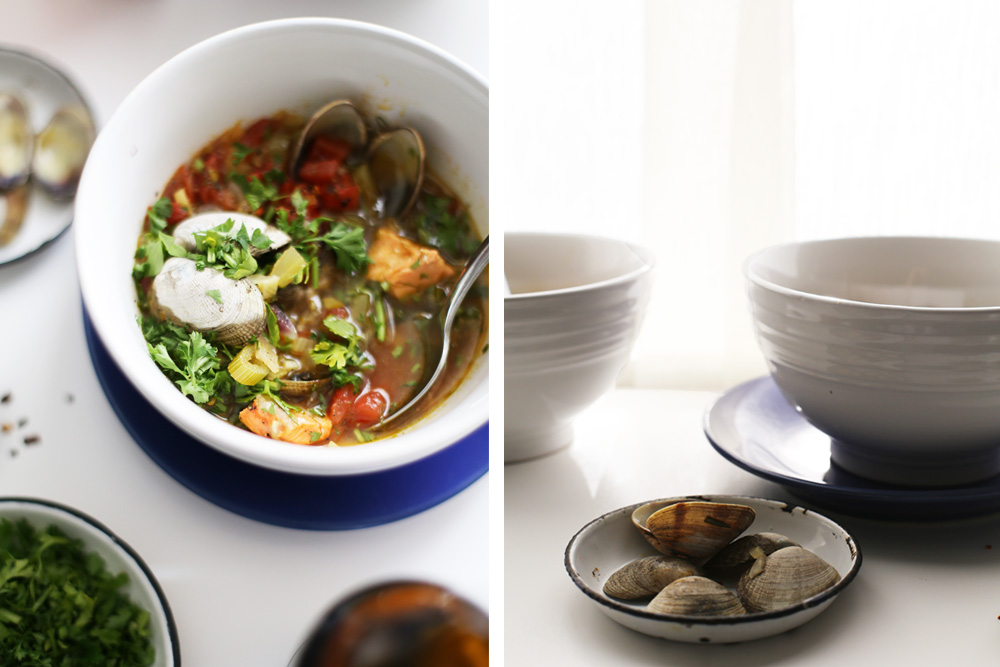 Previous Post: « Happy happy season’s greetings to you
Next Post: So this is what parsley is for. »