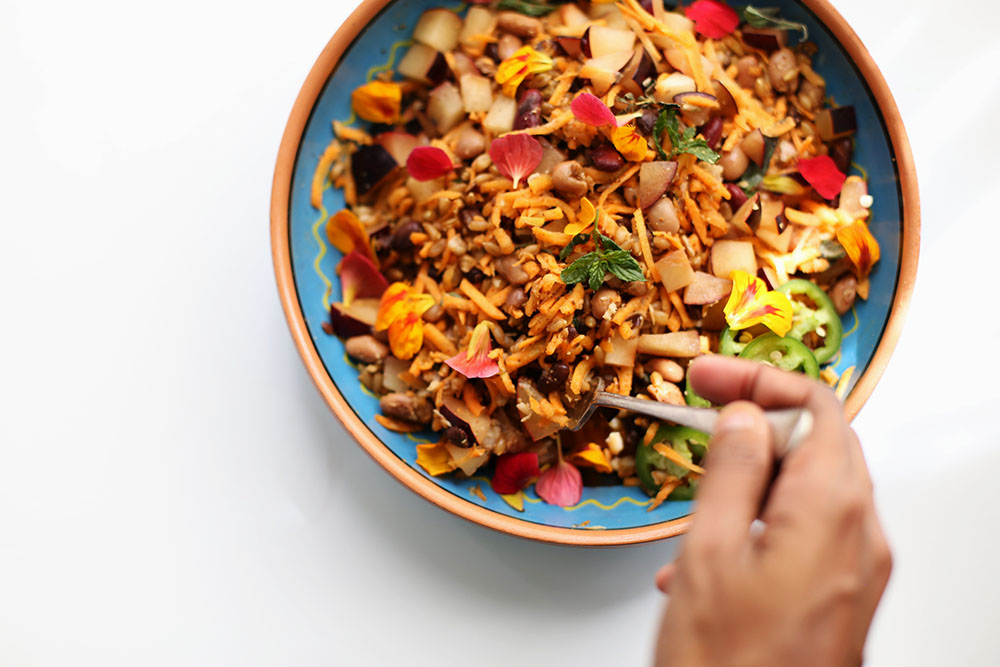 I sat at the dining table, my grandmother diagonally across from me that evening. A woman of 70-something, she hated to be alone. She would complain about it a lot when we had to go back to school after mid-term breaks or summer vacations. After I moved to Bombay to study, it was the same thing. That fear was part of her mental illness that consumed her every day. I didn’t notice it enough. I was young and self-absorbed. But that evening – like many others – she opened up about more than her insecurities.

“Do you know I was engaged to another man?” she said. I laughed. It was rare for her to make conversation, a possible side-effect from the medication she was taking for clinical depression. I didn’t know that then. Mental illness is still a joke and people suffering from any form of it are openly called “mad”. I did not know the story she was about to tell me. He was much older than her, she told me, almost double her age. He was wealthy and she was arranged to be married to him. He gave her a fancy ring. “I gave it back to him and told my mother I don’t want to marry this man,” she said. She told me his name and how he died a few months later, the cause of which was unrelated to her rejection and more to his health. Until that point, she was just my grandmother. I would call her grandma gramps, to be funny and “Grandma” every other time. Had I been more into seeking out strong female role models, she would have jumped to the top of the list that day.

She was a teacher who taught at a school in Kuwait and in Goa. She was born in Kabernet, Kenya to Indian immigrantsthat moved there to seek better financial opportunities. At the time, Kenya was also under oppressive white British rule and Asians and Africans were treated as second-class citizens because of their colour. My grandma also grew up in Belgaum in Karnataka and then Goa. She wasn’t very religious but she went to church  She loved children. After retiring from her job, she started a day care for young children with working parents. When we did get time off from school, we would go stay with her. She was separated from my grandfather and lived in a small flat in Mapusa. She had it set up for these children to have a memorable day while they were in her care. One musty, dark room was full of her treasures. My sister and I waited eagerly to go visit and every single time we would open all her jewellery boxes, check out her purse collection, her old clothes and her shoes. From an outsider looking in, she would seem to be a fashion icon. She was beautiful. Her mind however always told her differently.

She had a difficult marriage. She was emotionally abused by her in-laws, while her partner stayed silent. While she managed to escape being a widow at a young age (a status looked down upon in patriarchal Indian society), she was thrown into this other world that was just as harmful to her well-being. I love my grandfather. He treated us well as children and is part of some of my best childhood memories. Had he still been around right now, I would hope my courage would help me seek answers for her so I could put together this puzzle I have had in my mind. I know they provided well for their children, my mother and her brothers. They did the best they could and while their kids live with emotional wounds of their own, they were passed on the privilege of a comfortable life. This was the same privilege that allowed them to continue their education and pass it on to us, their children. I understand how this kind of oppressive history and abuse can manifest itself and arrest us from our goals. But something as simple as economic and gender privilege – as I interpret it – can ensure you a better seat at the table. I have a better seat. My grandmother didn’t.

I will never feel the fear she felt the day she died. I wasn’t thinking about it. I had gotten on a bus the day before to go to Bombay. My sister wanted me to come celebrate her birthday and got my dad to call the owner of the bus to buy me a seat (so much privilege). The next morning while we sat in Crawford Market drinking our milkshakes my father called me and told me what had happened.

Sometimes I think I can feel that exact same loneliness. My symptoms go away after a few days and I can push myself through them. I don’t need medication and I can function if I follow a routine. I did it yesterday. I wanted to go home and be among my family in Goa so badly because I know that despite them giving me side-eye for having an opinion about everything, they understand me. They are my “simpler time”. They understand that there are things that are bigger than me as an individual person and they will be on my side. Now more than ever, I realise the weight of my actions and link it to the past my people had to endure. They made it better for themselves so it could be better for all of us and not just one part.

My grandmother didn’t live with a mental illness. She survived despite it. She raised me a compassionate mother, who raised sisters with strength and inner beauty that blows my mind. She was never alone and for all the good that has come to be because of her, I’m sorry she had to feel that way.

Today is my grandma’s birthday. She was born on August 10, 1934. “We were seven brothers and four sisters,” she would say. She was the best grandma. She let us play dress up with all her clothes and jewellery, cooked us delicious food that always had me excited for lunch and laughed like a teenager every time she sneakily farted. She constantly told me not to bite my nails, and I always think of her when I (still) do. I had written this piece about her in 2016 in my Tiny Letter, when I was coming to terms with her loss 3 years after the fact. Sometimes that can happen. Sometimes we need to grow up a little to find the tools we need to cope with what ails us. I looooooooooove her and I will celebrate with her favourite takehome delivery food, tandoori chicken. 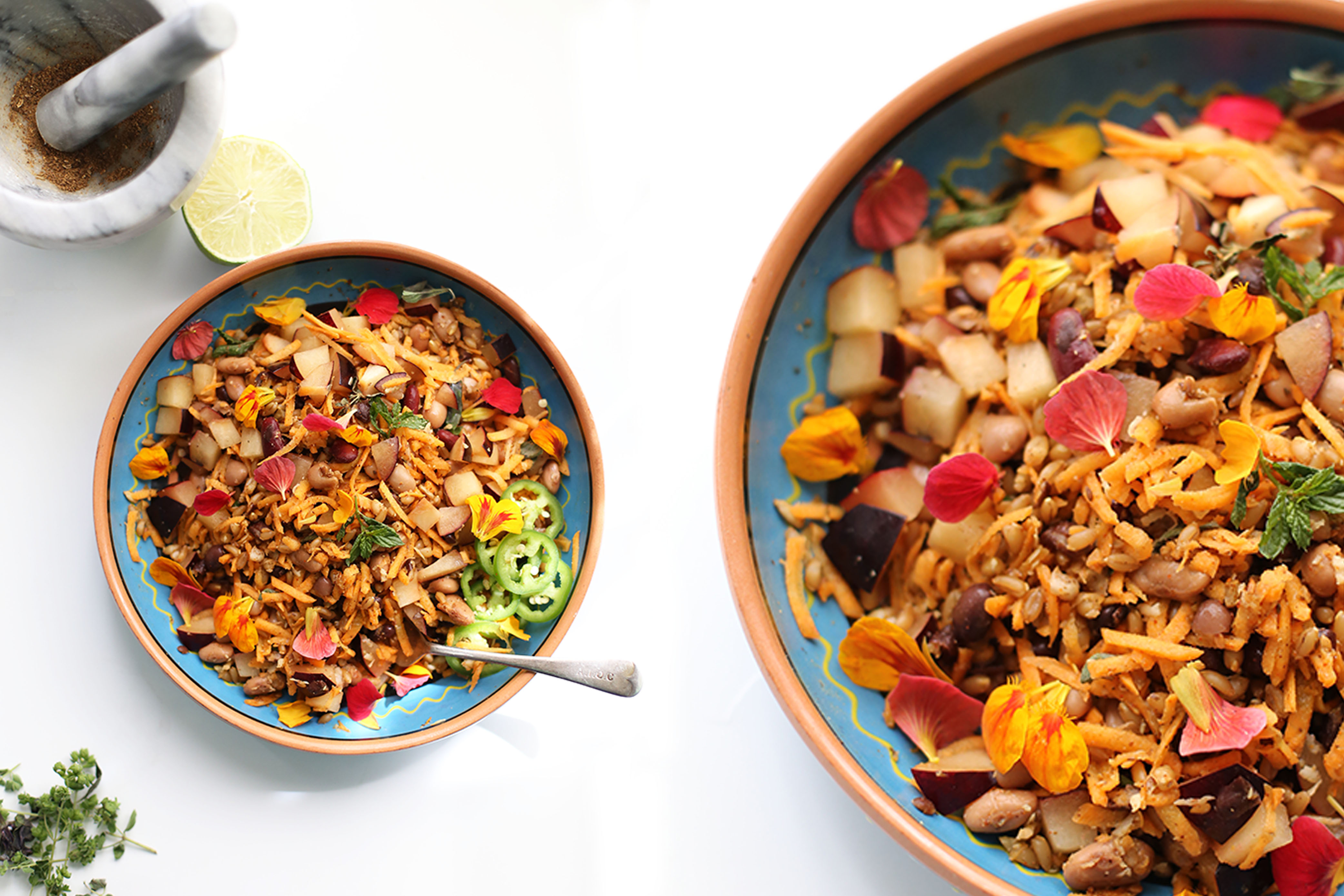 Chatpata is the Hindi word for savoury, sweet, spicy, sour and flavours you can’t quite put your finger on. Make sure you do the following: Use sweet carrots (they smell carrot-y), a delicious plum, lots of herbs and lime juice and balance it all accordingly with salt. A lot of my recipes are as good as your tastebuds. If you like more of something or less of another, feel free to adjust as you go. The spices leading the recipe are all whole and toasted. If you want to make it easier on yourself, you can use pre-ground spices. The brown mustard seeds aren’t usually sold in their ground form so just toast them till according to the recipe below and add them in whole.

Place a tawa or skillet on medium heat and add the cumin, mustard, caraway and coriander seeds to it. As the surface starts to heat up, stir the spices to allow them to roast evenly and also stop them from burning. Take the tawa or skillet off the stove when the spices turn fragrant and you hear the first somewhat quiet *pop* sound (about 2-3 minutes). Immediately transfer the spices to a spice grinder or a mortar-pestle. Let them cool for a minute and then grind them to a powder. Mix the paprika into the powder.

In a large serving bowl, mix 1 tsp of the spice powder in with the carrot. Squeeze part of the lime over it and toss. Add salt to taste and let it sit for 10 minutes.

In the same bowl with the carrot, add in the farro, beans, plum bits and coconut and mix it all together. Add in the fresh herbs, sunflower seeds or peanuts and jalapeno rounds. Taste for salt and add as required. Finish off with another sprinkle of the spice powder and more lime juice. Serve at room temperature or cold. It gets better the next day.